The first thing you’ll notice after pulling the My Book Live NAS device out of the box is how streamlined the design is. With a no frills approach to this device, all you see from the outside is a matte black finish on the product, an Ethernet port on the back, and a power plug. There aren’t any USB ports or places to plug in additional storage if you were thinking of using this device as a small media server that is capable of expansion.

Smooth Sailing
What really struck us about the My Book Live NAS device from Western Digital is how basic it really was. The word basic sometimes evokes negative thoughts from customers, but we thought the exact opposite. Western Digital isn’t trying to add anything special or over the top to this device. They focused their efforts on making this device perform exactly as you’d expect a NAS device to perform over the network and didn’t add any of the unnecessary frills and software “upgrades” that usually just end up cluttering and bogging the device down.

The My Book Live is capable of automatic backups on both Mac, using the Time Machine software, and PC. The device is UPnP out of the box, meaning you can use it to stream media files across your home network to capable devices, such as your Sony Playstation 3 or XBOX360. The only added feature that Western Digital has put into the device is the ability to use the device as a file server, not just as added storage on the network. This requires a little extra set up on the part of the user, as access permissions for different network users have to be set up by the network admin, but with the help of an installation CD that comes prepackaged with the device, setup doesn’t take long at all.

Online Access
One feature that we found a little misleading about the My Book Live was that the packaging says that you can access your files anywhere from any web browser. While that statement is true, the implication of those words is that the My Book Live can act as its own standalone web server, when in reality that’s not quite the case. The ability to access the files on the My Book Live comes from downloading a separate piece of software to your PC and using your home computer or laptop as the server that then accesses the data across your network from the NAS device. While that may not be a problem for most, some people aren’t comfortable leaving their computer on 24/7 to have access to their NAS device.

Thumbs Up
Despite the minor inconvenience of having to leave your computer on to access the NAS device from anywhere on the globe, we’d still say the My Book Live from Western Digital is a great buy. And considering that you get a whopping 2TB of storage with quick and easy access across your home network, there’s no reason you shouldn’t have a NAS device like this one in your home already. 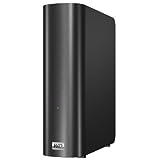